Political Fiction & Thrillers
& The Secret To Writing Them!

Is There A Secret To Writing Great Political Fiction?

Political Thrillers may be a relatively new sub-genre but Political fiction certainly isn’t! As early as 380 BC, Plato’s work ‘Republic’, a fictional Socratic dialogue, became one of the world’s most politically influential writings. Likewise, both politically straightforward and subversive novels such as George Orwell’s novels Animal Farm’, and ‘Nineteen eighty-four’, promote critical thinking within their narrative, and familiarise the reader with political theories and systems. Both the satire and the thriller employ fully conscious strategies to “fuse political purpose and artistic purpose into one whole” (George Orwell).

What of the content in political fiction? This too can serve to acquaint the reader with common political practices, or even corruptions. From this platform, they can more easily see through the minefield of the spin doctored postulations and manipulated influence that many political groups and figures have to offer. For instance, the more aware an individual becomes of political practice, the more informed their decision when it comes to an issue where their vote holds weight. Ultimately, it can be suggested that political fiction can open up politics to the common man.

Take, for example, ‘A modest proposal’ by Jonathan Swift (1729), in which the author proposes the poor and starving Irish sell their children as food for the rich. This unrealistic and repellent suggestion nevertheless satirically highlights the British government’s disgraceful policy towards the Irish at that time.

So what is the secret of writing a great political thriller? For me, it involves the believability of the story. Even though Nineteen eighty-four takes us on a horrifying gut-wrenching journey of voyeuristic manipulation and punishment, somehow each further atrocity is not surprising. As an academic, George Orwell is familiar with how political decisions can develop and infringe on human liberties, and uses this knowledge to good effect.

Pitching the rhetoric at just the right point between the believable and the unbelievable compels the reader to continue, and forces them to ponder on possible political realities of the future. Secondly, it must include political elements that are relevant, and that the readers of that time are willing to invest in. This can be seen historically in many famous political thrillers in their criticisms of existing society. That said, sometimes it is just great to sit down with the twists and turns of a great story just for pleasure’s sake! 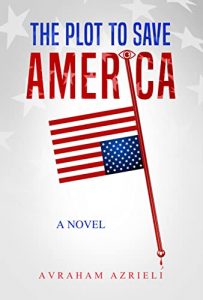 A compelling alternative history novel with some big ideas woven into it readers seeking an intelligent and thought-provoking read won’t be disappointed with “The Plot To Save America” exploring subversive notions about integrity, liberty, and political change.