The Next Outlander Novel? - The Two Things Authors Wanting To Emulate The Success Of Diana Gabalon Must Get Right.

Magic, fantasy and romance continue to prove an irresistible mix for an army of readers the world over. Of course, novels like Outlander by Diana Gabaldon, Time’s Echo by Pamela Hartshorne and The Night Mark by Tiffany Reisz fan the genres enduring appeal but with so many ‘read alike’ titles reaching the shelves it’s becoming increasingly more difficult to separate the proverbial wheat from the chaff.

Needless to say that readers are becoming ever more discerning and know exactly what they want from a novel that singes the fingertips whilst transporting them through the annals of time. Not only do they want sizzling romance, great characters and a striking visual backdrop, they’re increasingly demanding the same level of detail and accuracy we have come to expect from historical fiction too.

Unfortunately, the genre is plagued with pitfalls that inexperienced authors often fall foul of but there are two in particular that lead many readers to abandon their latest read and they more often than not can be found in romance that revolves around time travel and the subject of Déjà vu.

Meticulous research is essential if an author is to capture that all important sense of authenticity and far too many fall short of genre expectations. And then there’s the all important plot with writing across disparate time lines bringing its own particular challenges. The most notable of which is ensuring the tension doesn’t wane between those settings in the modern and older world that protagonists find themselves inhabiting. 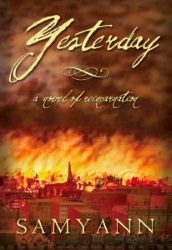 There are of course a number of household names like Diana Gabaldon who have it down to a fine art but there are some exciting new debut authors too who have done their homework and one of them is Samyann with her exciting Déjà vu novel Yesterday. You can read our review by clicking on the link here.

As always we like to keep our blog posts short and to the point and the team at BookViral welcome your comments and any recommendations you would like to add.

Now in its 5th year the Millennium Book Award goes from strength to strength whilst still maintaining the ethos upon which it was founded. Limited to 1000 submissions in each year we are proud to have honoured the brightest and best in the world of indie and traditional publishing.