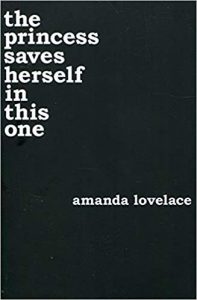 SUMMARY: Winner of the 2016 Goodreads Choice Award, the princess saves herself in this one is a collection of poetry about resilience. It is about writing your own ending.

The BookViral Review: From her literature, to her Instagram, and her tarot reading, Amanda Lovelace champions the woman.

Poetry in itself is often subtle with undulating undercurrents which hint at the emotions of the poet, though at times it is also raw and exposes normally hidden feelings. In The princess saves herself in this one Lovelace successfully negotiates both styles, at times her words are gentle and whispered, but at others she portrays starkly subjects such as hurt, betrayal, and loss.

Amanda`s writings also breed confidence and independence, often in only a few poignant words. And for those who feel broken by love, her sentiments encourage personally motivated recovery and self-belief.

In our new shiny world of equality these are the right motivations, the right set of principles and the right beliefs about how women have the right to be-namely as they choose.

Some may argue that the feminine gender is naturally softer, caring and empathic, all fine qualities in themselves. And as such, as we strive towards independence, are we losing some of those differences that create a complimentary accord between the sexes? Or should woman always be the warrior? Or in fact could we achieve a state where both sexes save each other, but in different ways?

Conceal the scar and paint my face. Of wrecked emotion, leave no trace.

Replace the mask and don the veil. Tell no one of this sorry tale.” 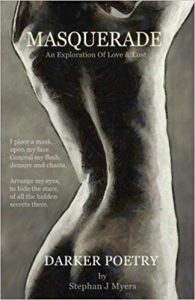