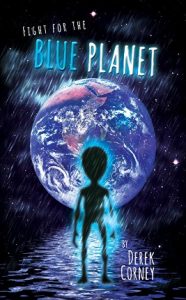 SUMMARY: Three young heroes and an epic battle to save our planet!

The BookViral Review: A solid, fun and light-hearted sci-fi adventure for younger readers, Fight for the Blue Planet marks a genre debut for English Author Derek Corney and one he’s pulled of particularly well. Writing in this ever popular genre takes something a little different to stand out and Corney has penned an imaginative plot with plenty of unexpected twists and turns along the way. With an upbeat narrative that never takes itself too seriously Fight for the Blue Planet is ostensibly a story about saving our planet from resource scavenging alien invaders but its underlying theme is one of camaraderie with siblings Timmy, Adam and Salma brought to life in nicely nuanced dialogue and neatly-crafted personas. Add the equally engaging Shack-Shack, Sim-Sim and Lee-Lee and the scene is set for an epic battle against the Targ!

The problem with many Sci-Fi novels for young readers is they come across as rather two dimensional when compared to their onscreen counterparts but this certainly isn’t the case here. The plot is refreshingly devoid of extraneous complexity and yet Corney still manages to throw in a few curve balls to keep his readers guessing. A particularly nice touch is the origin story for the powers given to Timmy, Adam and Salma who find their molecules transformed and also provides for timely injections of humour along the way.

A strong debut with a clutch of superb characters, Fight for the Blue Planet bodes well for future releases from Corney and is highly recommended.