The Fire Of Winter By D K Marley 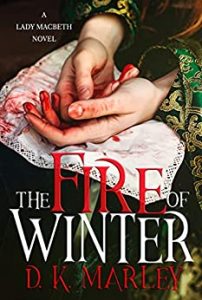 With ‘The Fire in Winter’  D.K. Marley offers the reader her own unique insight into the muddy, murky and blood soaked world of eleventh century Scotland. It is

most certainly not an easy path to follow, with its complex maze of aggressive and competitive families and individual family members or marriage connections forever feuding and plotting against a backdrop of a complex, ill formed and conflicting country suffering from a fundamental uncertainty of identity brought about by differing races, cultures and religious beliefs and practices.

Our narrator and guide for this epic journey is none other than Gruah, grand daughter of King Cinnead III of the Royal clan Alpin. She is, of course, better known to most as the Lady Macbeth of Shakespeare. Her story is well enough known. It is a tale of a wife with vaunting ambitions for her husband, tainted by her emotions to acts of supreme treachery and bloodshed, in the committing of which are the roots of her own madness and suicide. We know also that her acts are inseparable from the involvement of the supernatural and the occult; dominated by Hecate [the only named witch in Shakespeare] and her three daughters, ‘the weird sisters’. Under their influence, occasionally malign and occasionally caring, there seems to be an inevitability that renders all human activity and individual endeavour meaningless; so runs the Shakespearean version of the tale.

In her exciting and detail packed narrative, Marley firmly places her heroine in the very eye of the storm, from an abused and threatened little girl through her days as the drug addled and all powerful first Queen of Scotland to a reflective old lady, seemingly reconciled to her violent past and living out her days in foreign exile. All the individuals and their motives and actions, all of the consequences, are seen through the eyes of the Lady Macbeth.

This is a fast paced and excellently woven tale. It is packed with historical detail and the many perceptive character portraits are drawn with delicacy and sensitivity. Marley takes us by the hand through all the difficult  thickets in a finely drawn alternative to a story we thought we always knew. This is a must for all devotees of good Medieval Historical fiction.