A Review Of Meeting Mozart By Howard Jay Smith 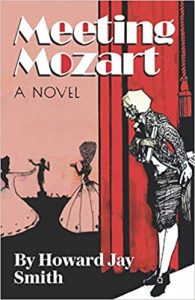 Meeting Mozart: A Novel Drawn From the Secret Diaries of Lorenzo Da Ponte is a deftly plotted and richly detailed historical novel that spans generations and involves Mozart, mysteries, masquerades, opera, and spies. It brings to light the incredible life story of Mozart’s librettist, Lorenzo Da Ponte, the Jewish-born priest who created The Marriage of Figaro, Don Giovanni, and Cosi Fan Tutte. According to one reviewer, Meeting Mozart is “the musical equivalent of The Da Vinci Code.”

‘Meeting Mozart’ by Howard Jay Smith, the author also of ‘Beethoven in Love; Opus 139’, is an astonishing and compelling piece of extended creative writing.  It is a work where exquisitely researched historical fact meets a compelling fictional narrative through two centuries and covering the Europe of the eighteenth century cities of Venice, Vienna and Prague to the New World and the young city of New York and a deli. It is a remarkable creation of a world in a seamless narrative covering two centuries and two continents.

Lorenzo da Ponti, a Jew, hides his identity and emerges as a lapsed Catholic Priest, friend and confidante of many; the notorious Casanova among them. Quick witted, a gambler, poet and womaniser, he discovers the expression of his true genius through his collaboration with that giant of eighteenth century music, Wolfgang Amadeus Mozart. Da Ponti blends his discovered unique talent as a librettist with the Maestro himself to create some of the world’s outstanding works of musical creation.

This is, also, a gripping and enthralling tale of spycraft, intrigue and murder and of truly remarkable women; strong, vibrant, loving and utterly courageous. Lorenzo Da Ponti thus makes his way in the world and masks his identity in the profoundly anti Semitic society of the fashionable Salons and theatres and the back streets of Europe to a New York Deli, to be discovered once more by his descendants. In a mystical and seemingly genetic manner, the strand of intense love that Da Ponte feels for Zina passes the generations to his descendant Jake and his love for Dolcetta and to Ziva’s intense passion for Yael.

Howard Jay Smith’s  tale is one of rich invention and character that rewards the entranced reader with so much. Intrigue, humour and historical veracity in its most most vivid form is presented in a broad and rich canvas that simply cannot fail to attract.