A Review Of Shattered By Susannah J. Bell 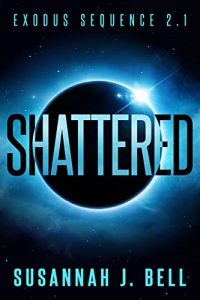 SUMMARY: While events race towards political disaster and an inevitable war, the Queen takes her “holiday” in the body of a Neanderthal woman called Yani. Learning to survive on a primitive world, she discovers a different kind of power – and the truth about the one they call “Meridian.”

For readers who are fans of large scale science fiction or epic fantasy (and like to take time to reflect on origin stories) then Shattered proves an absolute must-read!

As a standalone novella in the Exodus Sequence, it’s a relatively quick read but its plot is superbly layered with Bell using a far-flung future (or past setting depending on your take) to explore big ideas.

It’s in the nature of such reads that the big ideas are talked through and explained by the characters as we go along and here Bell uses her characters to explore some really big concepts – immortality and the soul, reincarnation and the nature of evolution whilst keeping them understandable to the average reader. In the main she achieves this through her emphasis on powerful characters as opposed to baffling techno-jargon which in turn lends her exposition a remarkable level of lucidity.

It is inevitable, even on a subconscious level that science fiction reflects the emerging questions and beliefs of the place and time in which it was written. On this level Bell’s female characters are consistently strong whilst human potential, altered states of consciousness and our growing disenchantment with political interventionism are themes bubbling beneath the surface as she examines the best and worst aspects of ‘human’ nature.

Intelligent and thought-provoking, Shattered proves an exceptional read and is recommended without reservation. 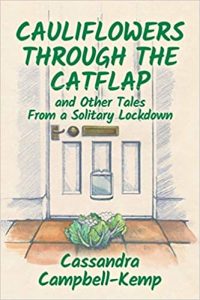 Full of irony and with a wry, sometimes depreciating flavour, ‘Cauliflowers through the cat flap and other tales from a solitary lockdown’ is a transparent and honest fly on the wall biographical account of one woman’s lockdown experience. Not just any woman. A women who is indeed, as her friends tell her, ‘excellent at putting words together’.