A BookViral Review Of Tears Of Fire By Gordon Bickerstaff 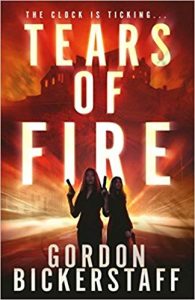 SUMMARY: Two serial killers have been getting away with murder for years. For them, it’s a well-paid hobby while they bide their time. It’s about to stop when everything slots into place for them to leap to the next level. Payback for the people who killed their parents. Lambeth Group investigator, Gavin Shawlens, is on their trail. But all is not as it seems and he is pushed way out of his depth when the killers turn on his family. Gavin’s Lambeth Group partner, Zoe Tampsin, is cut off from him and fighting her own battle to stay alive.

The BookViral Review: Escaping death by the skin of her teeth Zoe Tampsin once again finds herself in a deadly race against time. Unaware of Zoe’s plight Gavin Shawlens finds himself on a parallel path as their combined fates and that of the very world become perilously entwined. With an unmistakable narrative and superb plotting Bickerstaff’s Tears Of Fire is the latest release in his Lambeth Group series with no sign of the momentum waning. Writing in a nigh exhausted genre which unfortunately has seen its fair share of unreliable authors the best thrillers always offer something more ambitious than simply raising the pulse rate of the reader and this is something Bickerstaff has down to a fine art. He has continued to hone his skills to demonstrate his command of the thriller idiom and as with previous outings for  Zoe and Gavin, he delivers a striking, unpretentious thriller that keeps readers pleasurably on edge as he orchestrates the tension right up to a vertiginous denouement.

With its teeming, vividly drawn cast of characters and Bickerstaff once again firing on all cylinders his fans are justly rewarded for their following with Tears Of Fire recommended without reservation.

Geology instructor Alex Cave receives an urgent message about an unusual event in Iceland. What he discovers is an alien artifact more powerful than a nuclear weapon.