A BookViral Review Of Thin Air By Lisa Gray 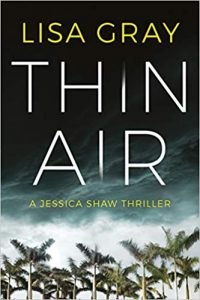 SUMMARY: Private investigator Jessica Shaw is used to getting anonymous tips. But after receiving a photo of a three-year-old kidnapped from Los Angeles twenty-five years ago, Jessica is stunned to recognize the little girl as herself. Eager for answers, Jessica heads to LA’s dark underbelly. When she learns that her biological mother was killed the night she was abducted, Jessica’s determined to solve a case the police have forgotten. To solve her mother’s murder and her own disappearance, Jessica must dig into the past and find the secrets buried there. But the air gets thinner as she crawls closer to the truth, and it’s getting harder and harder to breathe.

Very few authors debut as bestsellers even less arrive on the scene with a genuinely outstanding novel and yet Lisa Gray confidently achieves both. Conceptually powerful with a superb multi-layered plot allegory is one of the hardest fictional ploys to sustain for any length of time but here Gray tackles identity in a way that is both intelligent and gripping. With some authors, characters beyond their protagonists often seem little more than abstractions but Gray’s characters bring genuine depth and alignment within her overarching narrative. Ultimately though, the success of Thin Air comes from a combination of Gray’s ability to combine a credible story with her ability to convey intense emotions in simple, unaffected prose and this is one area in which she clearly excels. Add to this the fundamentals of a taut edge of your seat thriller and it’s no wonder Gray has charted in Amazon’s Top 20.

At last, a character who can give Lee Child’s Jack Reacher a run for his money! Thin Air proves a superb read and is recommended without reservation.

Now his hands, his hands are moving. Flimsy lingerie removing.                  Breathless panting sighs are proving. That my body craves for more.